Why Is Meghan Markle Being Blamed for the Prince William-Harry Rift?

Once again, Meghan Markle is being blamed for something else that she had nothing to do with.

In a new book, the Duchess of Sussex is being blamed for the rift between Princes William and Harry. Specifically, Robert Lacey said that the two brothers had a “bitter explosion” as the relationship with Markle began developing.

Naturally, the public and press blame Markle for the fallout (I’m surprised she hasn’t yet been blamed for Guy Fawkes Day). But at what point do we acknowledge that William and Harry are adults who have the free will to do what they want?

Why Is Meghan Markle Being Blamed For Two Grown Men Falling Out?

In his new book “Battle of Brothers,” Lacey — who is now a consultant on the hit Netflix series “The Crown” — wrote that Prince William wanted Prince Harry to “slow down” when it came to his then-burgeoning relationship with Meghan Markle.

That, in and of itself, was intrusive enough, but then the Duke of Cambridge upped the ante by getting their uncle — and Princess Diana’s brother — the Earl of Spencer, involved with the nonsense.

As Lacey wrote in the book:

The close relationship between the two young royals was shattered when the Duke of Cambridge called on Charles Spencer to persuade the Duke of Sussex to slow things down. So Harry could not help but wonder whether Wills was really concerned about his personal happiness — or whether he was, once again and as per usual, thinking about the make-up and fortunes of ‘the Firm’ whose boss he would become one day? The response from Harry was a brusque and offended pushback—and after several more peppery reactions, William turned to his uncle Charles Spencer for help. The result of the Spencer intervention was an even more bitter explosion. Once again Harry refused to slow down. He didn’t blame his uncle. He understood why Diana’s brother should want to help. Yet he was furious with his elder brother for dragging other family members into the row.

The video below explains it in better detail. 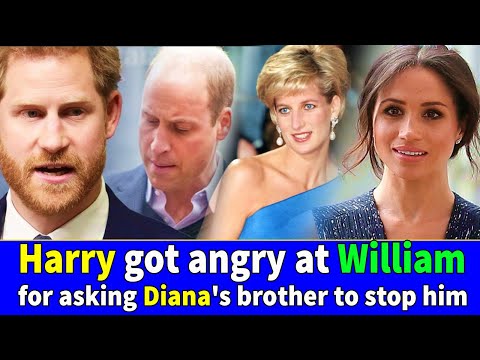 And according to the British gutter press and public, the blame of all this falls on Meghan Markle — who wasn’t present at the onset of the argument, who wasn’t brought “into the mix” of the argument, and who didn’t do anything except marry Prince Harry.

This is perhaps the most nonsensical and fantastical contortion of reality I’ve ever seen.

Adult Men Can Do What They Want To Do

Those quick to blame Meghan Markle for this fallout forget to realize one thing: Prince William and Prince Harry are adults. Grown men. And royal born and bred — allegedly smarter and better than the rest of us.

At some point, you’re all going to have to acknowledge that Prince William and Prince Harry are grown men, and they made a series of decisions that caused their fallout. If Meghan Markle is so powerful that she can threaten the stability of the monarchy merely by showing up, then — in the immortal words of Erik Killmonger — I have to ask, “Is this your King?”

The Tether (USDT) Treasury has minted almost half a billion new USDT tokens and distributed more than 185 million...

With the United States Presidential Election set for next month, the concern over fake news has once again dominated...